As those of you who have toured the vineyard with me know, we’ve spent a great deal of time trying to understand Dodon’s ancient soils and the agriculture that has influenced their current expression. One dominant theme is tobacco, which stripped much of the land of organic matter, nutrients, and microbial activity, making this a terrific site for wine growing. We often comment that we can taste these old tobacco plantings in our Cabernet Sauvignon, enough so that we decided to call our Cabernet-based blend “Oronoco” after the variety of tobacco grown here. 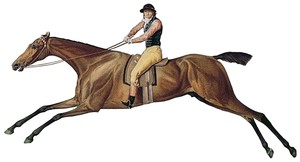 The second theme is thoroughbred horses. The story about the match race held May 4, 1743, between Dungannon, a horse imported from England by George Hume Steuart, and a horse from the stable of Charles Carroll of Annapolis is the stuff of legend. Steuart purchased Dodon from Nicholas Carroll in 1725 and was thus the first of the nine generations of our family to live and work here. We’ll celebrate this event on May 14th with release of Dodon’s first Collectors wine, also named Dungannon, and a race rematch between horses ridden by Polly’s brother Steuart and Randall Pearre, a descendent of Charles Carroll.

Because the Maryland Gazette was not published between 1734 and 1745, we know don’t very much about the origins of the race or why the Steuarts and the Carrolls were the protagonists. Both families were wealthy landowners and horsemen, and they may have participated in the horse races that took place during 1720s and 30s at the city fairground north of West Street. According to Jane McWilliams, in Annapolis, City on the Severn, by the 1740s, the horse races were better attended than the fairs and were a source of entertainment.

In my musings, I like to think of the Steuart vs. Carroll race as nothing more than a pleasurable way for friends to spend a spring afternoon, perhaps a bit fancier and more embellished than the races that preceded it, but a pastime none-the-less. The trophy for the race, a silver punch bowl called the Annapolis Subscription Plate, was much fancier than the spoons given the winners of prior Annapolis races. It is described as the oldest surviving silver object minted in Maryland and the second oldest horse-racing trophy in America.

But legend and verifiable truth are sometimes hard to disentangle. Most tellings suggest that the Steuarts issued a serious challenge to the Carrolls, but the reason is not described. Once again, according to Jane McWilliams, George Hume Steuart and Charles Carroll had many disagreements in the years leading up to the Revolutionary War, but whether these played a role in a 1743 challenge to defend family honor isn’t known. The Maryland Jockey Club was formed at about the same time as the race, but its role in planning that race is unknown. Certainly the Jockey Club would soon organize Annapolis Race Week, a significant annual event attended by George Washington, and it went on to play an important role in the growth of horse racing throughout the country. Dungannon must have won the race, since the trophy ended up in the Steuart family and was later loaned in 1932 by family descendants to the Baltimore Museum of Art, where it remains on display to this day.

Nostalgia and hyperbole aside, we love the story and hope to add to it with the May 14th rematch. Horse racing, like wine growing, is about connecting with nature, heightening our senses, and most importantly sharing a pleasurable moment with friends and family. And like this historical narrative, really great wines are full of intellectual intrigue and hedonistic surprise, constantly drawing you back to the glass to find its subtle nuance. In this way, Dungannon, the legendary horse, and Dungannon, the wine, share a great deal.

Makeyourmands
@ Aug 28, 2022 at 9:25 AM
http://surveysweepstakes.blog/makeyourmands-co-uk/
WONDERFUL WINES FOR ANY OCCASION are available at Marks & Spencer. Customers from the UK are eligible to participate in makeyourmands guest satisfaction from the M&S store and Win £50. M&S store management utilizes our feedback to improve the store service.