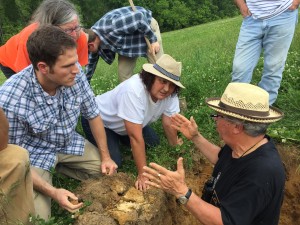 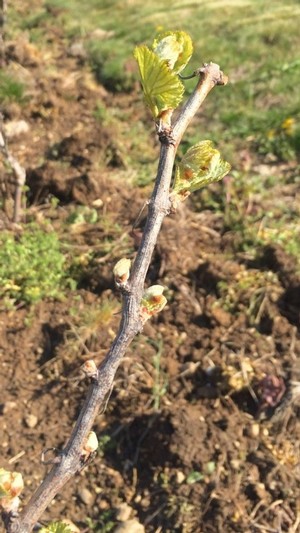 We are often asked in the depth of winter about the effect of cold temperatures on the vines. Usually, the answer is that cold weather during winter dormancy is good for them. Chardonnay and Merlot are the least cold hearty varieties at Dodon, and even these tolerate temperatures as low as -3 degrees F before there is any bud loss.

It’s a much different case in the spring, however. As the vines begin to emerge from dormancy, they are much less tolerant of the cold. The picture, taken this morning, shows a second leaf Chardonnay vine with buds in various stages of growth. Near the bottom, the buds are barely swollen and still very dormant. Buds at this stage will tolerate temperatures in the single digits. Moving up the vine, the buds are progressively swollen, near to the point of bud “break.” About half of buds at this stage will die when the temperatures reach 27 degrees F. Once the leaves have started to separate, they become progressively more susceptible to cold injury, as is the case with the bud at the top of the vine.

The vines at Dodon emerged from dormancy especially early this year after an unusually warm March. The temperature in the vineyard at 6am Wednesday morning was 23.2 degrees F, clearly well into the danger zone. We had prepared for the predicted cold by mowing the grass very short to capture as much warmth in the soil as possible, by cultivating the non-bearing blocks with small vines, and by spraying a mixture of potassium, calcium, and seaweed that alters the physiology of the vine in ways that mimic their dormant state.

Despite the extreme cold, the vineyard seems to be in good shape so far. We lost about half of the buds that had broken, but these are largely confined to the second leaf blocks of Chardonnay, where during our winter pruning, we left more buds that are needed for the coming vintage. Buds on the nearing vines appear healthy. More cold is on the way, with low temperatures in the high 20’s predicted, so we will spray again today. If an inversion is forecast (where warmer air is above a layer of very cold air at the surface), we will build fires at the bottom of each block to facilitate air circulation.